Yeah, that image got our attention too. If it's steep lines in aesthetic terrain, Bulgaria definitely has it. Each year, G3's distributor in Bulgaria, XCo Sports Ltd., holds an annual ski mountaineering photo story contest. We thought it might just get you stoked for the coming season. It did us. Here's a translation of the story of this first descent in the Rila Mountains, submitted by Georgi Georgiev, winner of the 2010 contest. With the descending of the Devil’s Couloir, we conducted a project the beginning of which was laid before more than 20 years ago. One morning in May 1991, together with Krasi Stoyanov, we were on the saddle between The Evil’s Tooth and Lovnitza peaks. The idea was to descend the White Couloir. We didn’t have any information about previous descends and the feeling was like embarking in something unknown and exciting. At that time freeride was not officially born. A few years earlier Petzata Gevrenov and Nikolay Grancharov descended the Maljovitza Corridor – the first descent on categorized alpine route, something that no one has ever imagined to do till that moment in Bulgaria. The winter mountain was a white field waiting to be written out with beautiful and bold lines. The descending of the White Couloir was beautiful and inspiring. After that I had gone back several times with clients or friends and I had always felt a very complex delight from the place, the slope, the line… Two or three years later we descended the Blue Couloir again with Krasi Stoyanov. We knew that things are quite different there. We had do several rappels, three if I remember right. The Blue Couloir was steeper that the White one and it was definitely a place where you should not fall. I have passed through it quite a few times during the summer, you get to the rock climbing routes at the Needle Peak and the 400 meter south wall of Dvuglav peak, so I had an approximate idea what was awaiting us. One of my more vivid memories from that descent was how during one of the abseils my skis released and fell in a quite wide crack between the snow and the rock. I had to go down quite deep in order to get them back. It was quite logically after the descending of the White and Blue Couloirs to plan on skiing the third big couloir in this area of the Rila mountain – The Devil’s Couloir. It is placed between the Black wall of Dvuglav and the Devil’s Needles. You can reach it from the saddle between Orlovetz peak and The Tooth, which is the beginning of the Blue Couloir. It could be traversed under the south wall of the Tooth and you go out at the beginning of the couloir through a characteristic rock form called The ring. Going through some pictures of the couloir we got to the conclusion that here we had to do some abseils again. We also knew that it is very steep. The other pieces of information we were going to collect in the process of skiing. The previous evening we slept at the tea room of Maljovitza Hut. In the morning, on 27 of April about 6:30 a.m. we took off to the top. There were three of us: Krasi Stoyanov, Milena Padalska and me. Except for the ski equipment we were carrying two ropes of 8 mm and 25 meters at length, harnesses, crampons, rappelling equipment, ice axes and several pitons. At about 9:30 a.m. we were at the saddle between Orlovetz and The Evil tooth. We traversed from there with crampons and the ice tools to the Ring. The slope was at 50-55 degrees angle. The snow – solid firm. From the Ring we saw the beginning of the couloir. You go in on a tiny edge not steeper than 45 degrees. We decided to go in the slope with a rope – the place was open and at an eventual fall there would be a flight through the Devil’s Needles. After these first meters the slope opened and the incline increased. Actually, the steeper places were at about 55 degrees. Somewhere at the middle of the couloir the slope began to fall. At the lower part I had to let down again a short 10 meters long rappel through a rock ledge at which Krasi and Milena went around quite higher. The couloir ended with a waterfall about 40 metres tall. The lower snow line was at about 1,800 metres above the sea level. From there we entered in the lower part of the White couloir with a 20-meter long rappel and traversing the forest we reached to the Kirilova meadow, where a car was expecting us. The descent was beautiful, at some places technical – you need constant control, falling is extremely undesirable. You also need good knowledge for walking with crampons and rope manipulations. The snow is quite changeable in height which is something that we had also to have in mind. The landscape is indescribably beautiful and the feeling is that you are skiing in the heart of the mountains. 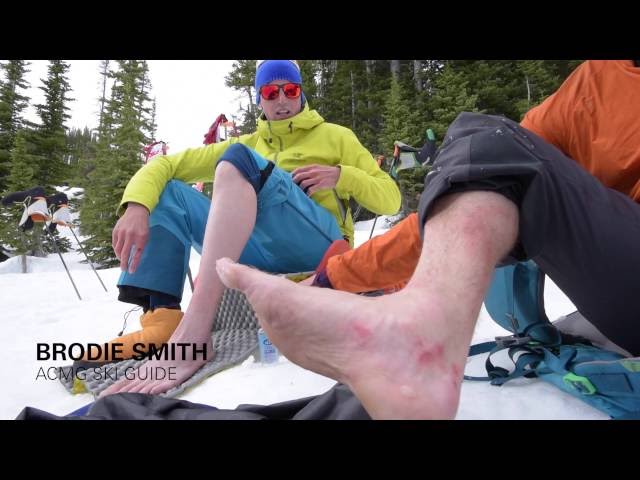