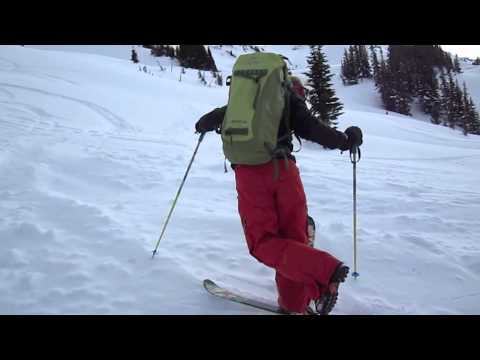 We're giving away that some G3 folks spent a little time recently at Whitecap Alpine, but while we had the undivided attention of a consummate backcountry professional like G3 team member Lars Andrews, we figured we'd capture on film the proper way to do a kick turn to change directions on a skin track in the backcountry. No better source for said info than a day-in/day-out backcountry-ski guide. As Lars demonstrates, there can be a few variations on the theme, but the idea is the same: change directions as efficiently as possible on steeper terrain where you can't accomplish the same thing by simply putting a curve in the skin track. A couple helpful hints: Use your poles, planted simultaneously, and out of the way of the direction you'll be pivoting your ski. Then move your poles before pivoting the next ski. If you have trouble making a kick turn without stepping on the tail of the other ski, you can kick the tail of the first ski into the ski to get it out of the way. In this instance, though, there's no substitute for visuals, so hit the play button.